Whether it's called Kumamoto Red, Red Wagyu, Japanese Brown, or American Akaushi, the breed of red/brown Wagyu cattle originating from the Kumamoto Island in Japan has been subjected to intense genetic improvement for over 100 years. In Japan, carcass performance, breeding pedigrees and economic data has been collected in an effort to refine and improve the breed. The data has been used to select herd sires and dams and has been used to guide breeding plans for over 50 years.

The Japanese use of quantitative evaluations and a multi-tiered trait selection system has allowed them to breed an extremely uniform and consistent herd of Kumamoto Reds. Accordingly, the cattle from the Kumamoto Island are great grazers, extremely fertile, structurally sound, environmentally diverse, and produce a carcass described as legendary. Whether this breed is produced singularly as a full blood or its semen is used to produce F-1's or composites, the qualities aspired to from over a century of breeding becomes obvious whether it is observed in the field, the feed lot, or the dinner table.
Fortune shined on the American cattle industry when two Kumamoto red bulls arrived from Japan in 1976 and again in 1994 when a small nucleus of bulls and pregnant cows followed them here. The genetics from those two shipments are likely to be the last to ever leave Japan - the Kumamoto Red has been declared a national treasure and it genetics have been prohibited from exportation. Today, there are small populations of Kumamoto Reds in North America, South America, Australasia and a few have even made it to European Community. Every Kumamoto Red outside of Japan owes its existence to the American Cattlemen that orchestrated their importation in 1976 and 1994. 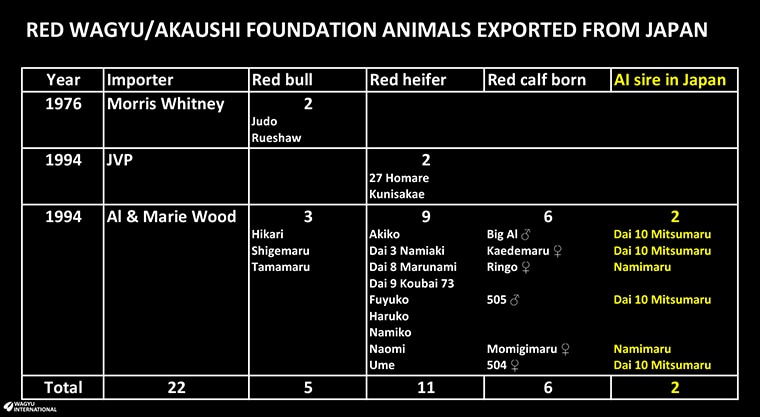