​Introduction: Although less widely identified in the West, Okayama Wagyu (including the Fujiyoshi line) is perceived in Japan as one of the five most important sub-populations or genetic strains. (See Honda et al). However, in the evolution of modern Japanese beef production since the 1950s, breeding of important Okayama strain cattle has frequently taken place outside the prefecture. Nowhere is this more evident than in the case of the founding sire of the Modern (Shimane) Itozakura line, Dai 7 Itozakura, source of the most pervasive ‘growth’ Wagyu genetics in current AI sires.
Okayama: Agriculture

​The agricultural economy of Okayama is substantially horticultural. Fertile plains along the coast of the Inland Sea support rice production but the prefecture is overwhelmingly recognized as the Fruit Bowl of Japan. The most famous product is peaches, with the shimuzu white peach acclaimed as the premium variety. About 55% of Japan’s peach production takes place in Okayama which is also home to one of Japan’s most famous fairy tales – appropriately: Momotaro, the Peach Boy. Muscat and pione grapes and melons are other major products. Small scale Wagyu production and forestry are dominant in the inland mountains. The Inland Sea provides an outstanding local fishery.
Okayama Wagyu

​Like Tottori, at the centre of the Chugoku region, Okayama lies in the cradle of the Japanese Black, founded on native Mishima cattle. East is Hyogo prefecture, home of the Tajima strain; north (behind the mountains) is Tottori prefecture , west is Hiroshima prefecture.
Modern Okayama Wagyu

​Through the second half of the 20th century, Okayama genetics became widely used in other prefectures, notably Shimane. Okayama genetic infusion targeted improvements such as frame size, primarily in cow herd development.
One outcome of this genetic travel has been debate as to the prefectural ‘ownership’ of subsequent successful bloodlines (See Mr Shogo Takeda, ‘TF 147 genetics explained’, in Australian Wagyu UpDate, August 2007). There is no debate that the sire lines involved all descend from Dai 13 Hanayama. However, within the debate, some cattle descended from his progeny, Dai 6 Fujimori and Dai 7 Itozakura, were identified as a (modern) Fujiyoshi line; while Shimane Prefecture-bred Dai 7 Itozakura descendants became known as the (modern) Itozakura line.
Much of the debate focused on the relative influences of sire and dam bloodline combinations. Today, widening divergences in progeny performance are identified by Mr Takeda to the extent that these should now be regarded as distinct modern bloodlines. Nonetheless, the Okayama origins are undeniable.
Major Okayama-influenced bulls descended from the foundation sire Dai 13 Hanayama include “Dai 6 Kiyokuni” (Kiyokuni Line), Dai 4 Shimomae (Shimomae Line) and “Dai 6 Fujiyoshi” (Fujiyoshi Line).
​

Dai 7 Itozakura was born in Shimane Prefecture on 10 December 1970, being 25% Tajima, 50% Fujiyoshi and 25% Okayama. His sire, Dai 14 Shigeru, was born in Okayama. His dam, Dai 9 Itozakura (Sire: Shiro-Doi, Dam: Matsuyoshino) was an elite Tajima-strain cow descended from the Hyogo foundation sire, Tajiri. On the basis of this Shimane Prefecture breeding, Dai 7 Itozakaura represents a terminal stub on the (Okayama) Fujiyoshi pedigree tree; and the starting point of the Modern (Shimane) Itozakura line.
Testing of the young sire revealed extraordinary daily gain, sustained in formal indirect progeny testing in 1975 (ADG 2.142 lbs.), which also revealed well-maintained marbling. Owned by Shimane Prefecture, Dai 7 Itozakura led the Japanese Wagyu industry trend to ‘economically well-balanced’ production; combining growth and fertility with acceptable meat quality. He also sired many of the outstanding ‘economical production’ bulls of the current period, including Itofuji. Economical production is regarded as ever more important today.
Dai 7 Itozakura died in 1982. 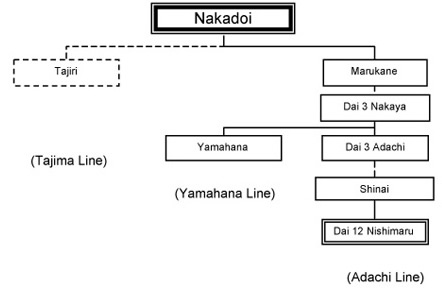 In modern Japanese breeding, the role of the Okayama bloodline (to a greater extent than Kedaka/Tottori) is in the development of superior cow herds. Within the most popular sires listing for 2007, there is no significant Okayama-line representative. In terms of 2007 national herd registrations, Okayama fielded just six bulls of 886. Even within Okayama Prefecture, Modern (Shimane) Itozakura bloodlines are used in cow herd development, Kedaka lines in sire selection.

Most of the benefits identified in relation to Kedaka/Tottori bloodlines in Wagyu breeding also apply to Okayama bloodlines – these include early maturity, growth/yield, fertility, milking ability and acceptable meat quality outcomes. Similarly, marbling results from cross-breeding will most likely be less than for high Tajima joining, but growth and yield can compensate.